After years of work to help keep the Eastern Sierra’s Bi-State sage grouse off the list of nationally-protected endangered species, a verdict has been reached. On Tuesday April 21, U.S. Secretary of the Interior Sally Jewell announced that the U.S. Fish and Wildlife Service (USFWS) has determined that the Bi-State population of Greater sage grouse will not be listed under the Endangered Species Act. 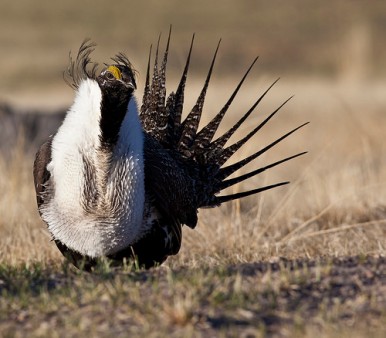 The Greater sage grouse is an unusual, ground-nesting bird found in pockets throughout the American West. It depends primarily on sagebrush habitat for food and shelter. Photo courtesy of the Bureau of Land Management.

This decision is largely thanks to the efforts of the Bi-State Local Area Working Group (LAWG), a dynamic partnership of ranchers, conservationists, agency and county representatives, and concerned citizens. The Bi-State LAWG created and implemented the Bi-State Action Plan, a long-term, collaborative conservation strategy that lays the groundwork to protect the sage grouse. The plan’s goal is to help sage grouse populations rebound without enacting land use restrictions that an endangered species listing would impose. The, “collaborative, science-based efforts [of the Bi-State LAWG] are proof that we can conserve sagebrush habitat across the West while we encourage sustainable economic development,” Secretary Jewell said in a statement.

The Eastern Sierra’s distinct population of Greater sage grouse is often seen on ranchland where irrigation and sustainable grazing provide an ideal environment for nesting and raising their young. But these working pastures pose serious risks to the sage grouse, and the barbed wire fences that encircle them snare a large number of these birds every year.

With a plan in place that will provide, “the single largest sage grouse restoration commitment in history,” according to the Sage Grouse Initiative, “focus is now shifting to accelerating conservation on the ground.” ESLT has been working to help direct efforts to protect sage grouse habitat by working to prevent development in high-priority areas, and by “tagging” fences to make them more visible to the birds. With partial funding assistance provided by the Natural Resources Conservation Service (NRCS), ESLT completed a conservation easement last fall at Sinnamon Meadows, a 1,240-acre ranch that contains critical sage grouse habitat. Since protecting the landscape against future development, ESLT and volunteers have tagged fences to make this property safer for sage grouse.

“The teamwork that went into the Bi-State Action Plan provided the proactive restoration of habitat that was needed to prevent the sage grouse from being listed,” commented ESLT Executive Director, Kay Ogden. “These partnerships between members of the ranching community, Mono County, and local and state agencies have provided a foundation on which the long-term protection of this unique species can be built.

“The Bi-State sage grouse is one of those iconic species that represents how unique – and fragile – our Eastern Sierra landscape truly is. ESLT is committed to working hand in hand with landowners to ensure that these unusual birds continue to have a home here long into the future.”

For more information, an online version of the Bi-State Action Plan can be viewed here. 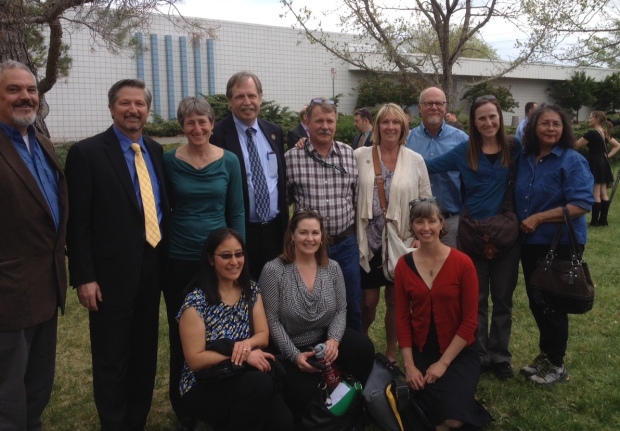 This group of Eastern Sierra leaders and sage grouse advocates was in Reno on Tuesday to join in the conversation regarding the pivotal decision not to list the Bi-State Greater sage grouse under the Endangered Species Act. Kay Ogden and ESLT Board Member Tim Bartley are seen above, alongside Mono County Supervisor Tim Fesko, U.S. Secretary of the Interior Sally Jewell, BLM-California State Director Jim Kenna, Bishop Field Office Manager Steve Nelson, BLM Wildlife Biologist Sherri Lisius, Wendy Sugimura of the Mono County Development Department, and representatives from our local BLM office, regional Paiute Tribes, and Friends of the Inyo.